Nowadays, the requirements for higher Internet access speed keep growing in different applications such as video conference, 3D and cable TV, which result in popularity of FTTH (fiber-to-the-home) deployments. Passive Optical Networks (PON), as the leading technology used in FTTH applications, are also widely used. PON transceivers are one of the important components in PON systems. This post intends to describe some basic knowledge of PON transceivers.

The GPON OLT transceiver is designed for GPON transmission. In order to illustrate this transceiver clear, let’s take the GPON OLT SFP module for an example (shown as following picture). The transceiver uses 1490nm continuous-mode transmitter and 1310nm burst-mode receiver. The transmitter section uses a high efficiency 1490nm DFB laser and an integrated laser driver which is designed to be eye safety under any single fault. The receiver section uses an integrated APD detector and bursts mode pre-amplifier mounted together. To provide fast settling time with immunity to long streams of Consecutive Identical Digits (CID), the receiver requires a reset signal provided by the media access controller (MAC). The GPON OLT SFP transceiver is a high performance and cost-effective module for serial optical data communication applications to 2.5Gpbs. 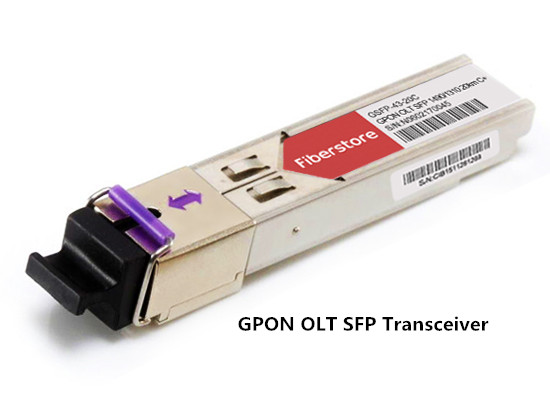 EPON OLT transceiver is designed for PON applications. It has SFP, XFP and SFP+ packages. Here we also introduce this transceiver by taking EPON OLT SFP transceiver as an example. Generally, EPON OLT SFP transceivers support 1.25Gbps downstream and 1.25Gbps upstream in EPON applications. Like the GPON OLT SFP transceiver, they also have 1490nm continuous-mode transmitter and 1310nm burst-mode receiver. And their transmission reach is 20 km. The transmitter section uses a 1490nm DFB with automatic power control (APC) function and temperature compensation circuitry, which can ensure stable extinction ratio overall temperature range. And the receiver section has a hermetically pre-amplifier and a limiting amplifier with LVPECL compatible differential outputs.

Although PON transceivers provide a satisfying performance in FTTH applications, there still exists some challenges in the following aspects:

PON transceiver is a high performance module for single fiber communications by using continuous-mode transmitter and burst-mode receiver with different data rate and wavelengths. In this post, the basis and common types of PON transceivers are illustrated. Hope it could help you. For more information, please visit FS.COM.

As time goes by, in order to meet the need for higher bandwidth, faster speed and better utilization of fiber optics, FTTH access networks designs have developed rapidly. And there are two basic paths of FTTH networks: active optical network (AON) and passive optical network (PON). However, how much do you know about the them? Do you know what’s the differences between the two systems? Now, this article will give a detailed comparison between them.

Active optical network, also called point-to-point network, usually uses electrically powered switching equipment such as a router or switch aggregator, to manage signal distribution and direct signals to specific customers. This switch opens and closes in various ways to direct incoming and outgoing signals to the proper place. Customers can have a dedicate fiber running to his or her home, but it needs many fibers.

Different from AON, PON doesn’t contain electrically powered switching equipment, instead it uses fiber optic splitters to guide traffic signals contained in specific wavelengths. The optical splitters can separate and collect optical signals when they run through the network. And powered equipment is needed only at the signal source and the receiving ends of the signals. Usually, the PON network can distribute signals into 16, 32 and 64 customers. 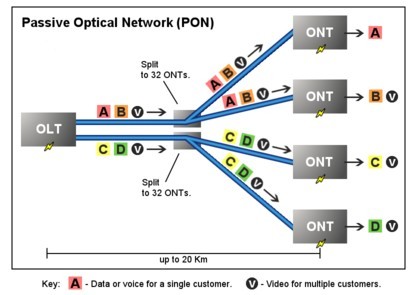 As data travel across the fiber connection, it needs a way to be directed so that the correct information can arrive at its intended destination. And AON and PON offer a way to separate data and set it upon its intended route to arrive at the proper place. Therefore, these two networks are widely applied in FTTH systems. However, each system has their own merits and shortcomings. Here is a simple comparison between them.

In AON networks, subscribers have a dedicated fiber optic strand. In another word, each subscriber gets the same bandwidth that doesn’t be shared. While the users share the fiber optic strands for a portion of the network. These different network structures also lead to different results. For example, if something goes wrong in a PON network, it will be difficult to find the source of the problem. But this problem does not exist in AON.

When running an existing network, it’s known to us that the main source of cost is the maintenance and powering equipment. However, PON uses passive components that only need less maintenance and do not need power, which contributes to that PON building is cheaper than that of AON.

AON networks can cover a range to about 100 km, a PON is typically limited to fiber cable runs of up to 20 km. That is to say, subscribers must be geographically closer to the central source of the data.

Of course, apart from what have been listed above, there are other differences between these two networks. For instance, AON network is currently the industry standard. It’s simple to add new devices to the network. And there are numbers of similar products on the market, which are convenient for users to select. Besides, AON is a powered network, which decides it’s less reliable than PON. However, since the bandwidth in PON is not dedicated to individual users, people who use a passive optical network may find that their system slows down during peak usage times.

In summary, AON and PON have their own advantages and disadvantages, but both of them provide practical solutions for FTTH network connection. There is no right or wrong answers when it comes to choose which one of them. FS.COM provides several kinds of PON equipment such as PON splitters and OLT/ONT Units. If you want to find out more, please visit Fiberstore website. 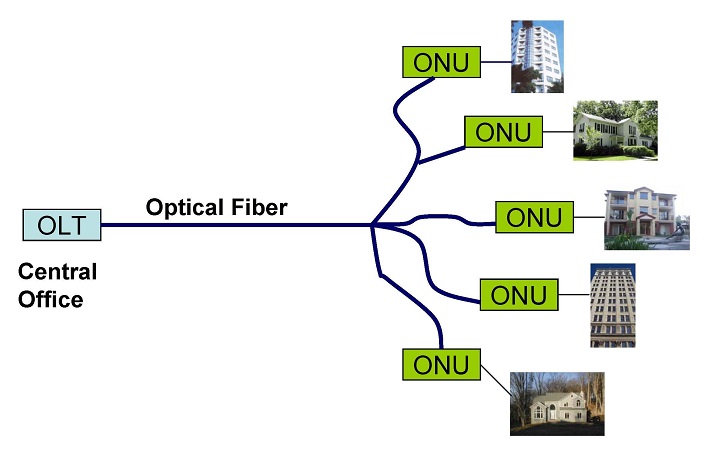