Now, data has become the most valuable asset since the Internet and e-commerce are growing at an explosive rate. How to store, protect and manage vital data in an effective way is a big challenge for IT technicians. Here, SAN, storage area network, has been developed to provide a creative model for data storing in the data center. Within its development, two types of IP SAN vs FC SAN has gained enough discussion. Today, we’ll talk about IP SAN vs FC SAN. 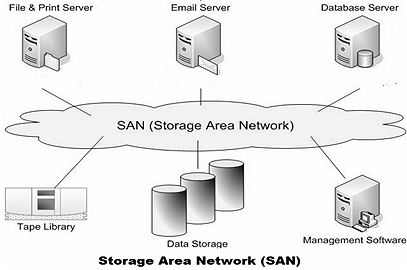 What Is IP SAN

From IP SAN wiki, we know it means internet protocol storage area network. It’s a SAN that uses iSCSI protocol, a transmission standard over TCP/IP, to transfer block data over an Ethernet network. IP SAN allows different servers to access pools of the shared block storage devices by storage protocols. Besides, IP storage network can be extended to Wide Area Network via IP router or Gigabit Ethernet switch, which is good for synchronous applications like remote disk copy.

What Is FC SAN

FC SAN is a fiber channel network in which the SCSI-FCP protocol runs. Based on fiber channel technology, technicians use fiber switch to connect the storage devices and the servers, so as to build a regional network dedicated to data storage. Within FC SAN, the data will be transferred directly at an extremely high speed.

As an open, high-speed serial interface, FC SAN has some advantages.

IP SAN vs FC SAN: What Is the Difference?

Here is a table shows the differences of IP SAN vs FC SAN.

IP SAN vs FC SAN, IP SAN is generally regarded as the lower cost, simpler to manage than the FC SAN. FC SAN needs special hardware like fiber switches or host bus adapters, while the IP SAN just requires the existing Ethernet networking hardware. Therefore, FC SAN is the ideal storage platform for many business-critical applications. And IP SAN is the suitable choice for those organizations that want a cost-efficient solution.

IP SAN vs FC SAN, it’s important to know their advantages and differences when you decide to build a SAN. Make a suitable choice based on your unique demands and knowledge. Any questions about SAN setup on switches, contact us via sales@fs.com.