Many devices in the optical communication field are sharing similar functions, such as fiber SFP module and fiber media converter. They are designed as the equipment for photoelectric conversion. Some of you may get confused about the two seemingly similar devices. Don’t worry, in this article, we are going to reveal the secret between SFP fiber module and fiber media converter. In the beginning, let’s go over the definitions of them.

What Is the Fiber SFP Module

What Is Fiber Media Converter? 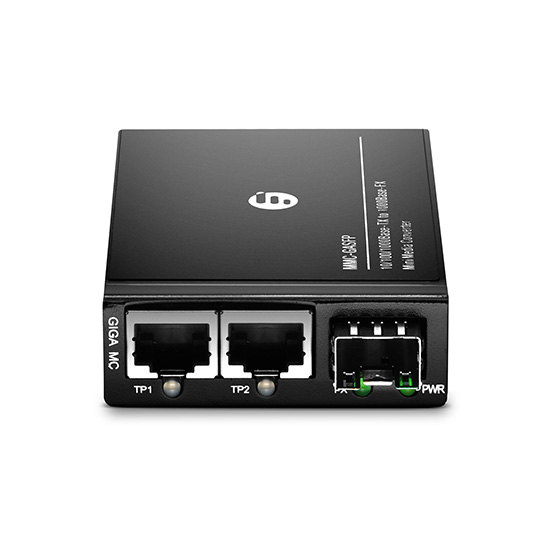 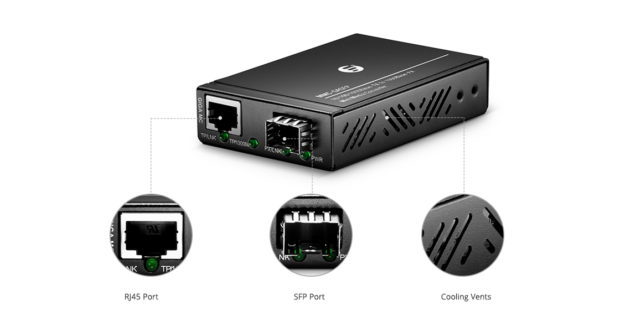 With the increased demands on the network, various network devices are manufactured to meet these demands. Fiber media converter is one of a key components in those devices. It features of high bandwidth capacity, long distance operation and reliability, making it popular in modern networking systems. This post is going to explore some basis and illustrates several application examples of fiber media converter. 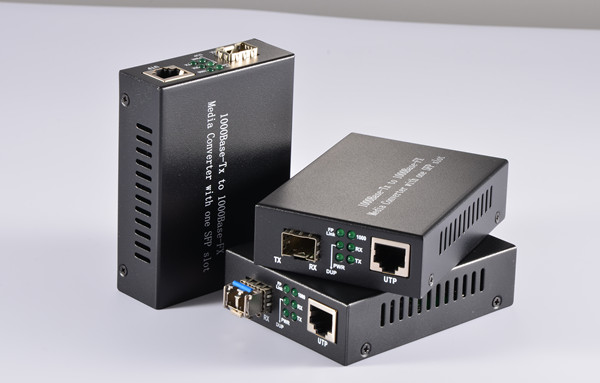 Since SMF supports longer distances than MMF, it’s common to see that conversions from MMF to SMF in enterprise networks. And fiber-to-fiber media converter can extend a MM network across SM fiber with distances up to 140km. With this capacity, long distance connection between two Gigabit Ethernet switches can be realized using a pair of Gigabit fiber-to-fiber converters (as shown in the following picture).

Single-fiber usually operates with bi-directional wavelengths, often referred to as BIDI. And the typically used wavelengths of BIDI single-fiber are 1310nm and 1550nm. In the following application, the two dual fiber media converters are linked by a single mode fiber cable. Since there are two different wavelengths on the fiber, the transmitter and receiver on both ends need to be matched.

This kind of media converter provides fiber extension for serial protocol copper connections. It can be connected with RS232, RS422 or RS485 port of computer or other devices, solving the problems of traditional RS232, RS422 or RS485 communication conflict between distance and rate. And it also supports point-to-point and multi-point configurations.

RS-232 fiber converters can operate as asynchronous devices, support speeds up to 921,600 baud, and support a wide variety of hardware flow control signals to enable seamless connectivity with most serial devices. In this example, a pair of RS-232 converters provides the serial connection between a PC and terminal server allowing access to multiple data devices via fiber.

RS-485 fiber converters are used in many multi-point applications where one computer controls many different devices. As shown in the picture below, a pair of RS-485 converters provides the multi-drop connection between the host equipment and connected multi-drop devices via fiber cable.

Affected by the limitation of Ethernet cables and increased network speeds, networks are becoming more and more complicated. The application of fiber media converters not only overcome the distance limitations of traditional network cables, but enables your networks to connect with different types of medias like twisted pair, fiber and coax.

Fiber media converter or fiber converter is a device that links two different media signals for conversion, usually exchanging the signals on a copper cable with signals on an optic fiber cable. This device is often used in MAN (metropolitan area network) access and data transport services to enterprise customers. Fiber media converter provides a balanced flow, isolation, conflict and detection of errors and other functions to ensure high security and stability of data transmission. It also breaks the restriction of the Ethernet cable length to more than one hundred meters.

Knowing the function of fiber media converter helps you have a better understanding of your own system which contributes to the selection process. Generally speaking, fiber media converter receives data signals from one media and converts them to another while remaining invisible to data traffic and other net devices. It supports quality of service and layer 3 switching since it has no interference with upper-level protocol information. Fiber media converter changes the format of an Ethernet-based signal on twisted pairs into a format compatible with fiber optics. At the other end of the fiber cable run, a second media converter is used to change the data back to its original format.

Other Factors to Consider During Your Selection

Here are some factors that you can consider when purchasing a fiber media converter:

Fiber optic converters can be used in lots of applications. Here are some examples. Point to point application can connect two UTP Ethernet switches (or routers, servers, hubs, etc.) via fiber, or to connect UTP devices to workstations and file servers.

Multimode to single-mode application extends a multimode network across single-mode fiber with distances up to 160 km.

Over the years, there has been a growing popularity of Ethernet networks, resulting in the increasing use of Ethernet switches in the network infrastructure. But there is problem that the majority of Ethernet switches on the market today are available only with either 10Base-T or 100Base-TX interfaces (i.e., RJ-45). And on the other hand, in order to meet the needs of longer distance transmission and immunity to electrical interference or eavesdropping/interception, fiber cable has been used on a large scale. Since the entire network is not all twisted pair, the problem of how to interconnect disparate cabling types to the switch must be solved. As a result, media converter, a device which can convert RJ-45 to one of the fiber types in use, has been designed.

What is a Media Converter?

Media converter is a simple networking device that enables you to interconnect networks or network devices with different speeds, operation types, modes and media types. And the most common type usually works as a transceiver, converting the electrical signals in copper unshielded twisted pair (UTP) network cabling to light waves used for fiber optic cabling. It is essential to have the fiber optic connectivity if the distance between two network devices is greater than the copper cabling’s transmission distance. Since media converters are IEEE compliant devices, they implement IEEE data encoding rules and Link Integrity Test. 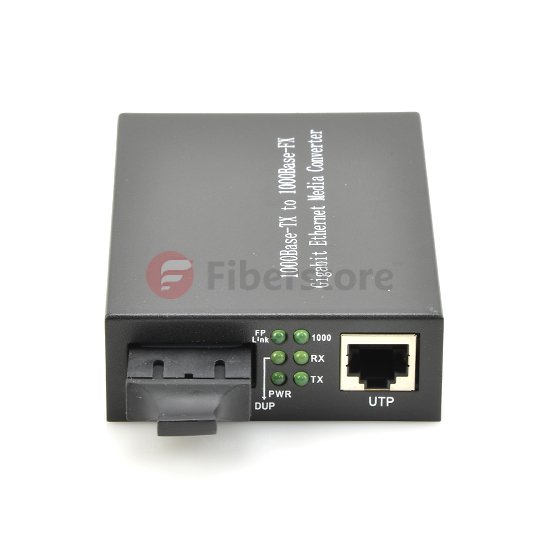 Nowadays, media converter plays an important role in multi-protocol and mixed-media networks. In general, media conversion can deliver the following benefits for your network environment:

Cost Reduction – Compared with the hybrid media switches, the cost of media converters with cost-effective Ethernet switches is much lower. What is more, the two devices can do the same job. This type of media converter solution can cost significantly less than that relies on higher-layer devices such as routers or switches.

Flexibility and Simplification – It is of much flexibility for media converter to combine copper with 850 nm and 1300 nm multimode fiber and 1310 nm and 1550 nm single-mode fiber. In addition, With protocol transparency, it can be applied in anywhere in the local network or remote network whether it’s a LAN or the WAN environment.

Ease of Use and High Availability – Configuring and installing redundant solution of media converter is much easier to handle and to manage than higher-layer devices. And it will makes the troubleshooting easier if you add management functions to the media converter.

Since media converter has so many advantages, it can support advanced bridge features – including VLAN, Quality of Service prioritization, Port Access Control and Bandwidth Control – that facilitate the deployment of new data, voice and video to end users. In a word, media converter does more than convert copper-to-fiber and convert between different fiber types. It can also provide all these sophisticated switch capabilities in a small, cost-effective device.