Fiber have become an integral part of today’s communication networks by transmission media because of its high transmission rate, low noise, and confidentiality, etc. With the application trends of the entire communications technology in the world, related fiber technologies have ran become fiber optic communications networks, data transmission, cable television and other important integral part of the transmission medium, its future market potential is limitless, it is the world’s advanced countries in the competition field. In fiber-optic communications network infrastructure, the fiber optic passive components due to the high technical level element, high value-added products, low investment, and is a critical element of the essential components of fiber optic networks, early become the focus of the manufacturer’s attention at home and abroad

Permanently connecting two fibers is known as fiber slicing. Fiber splicing can be by either mechanical means or fiber fusion. In mechanical methods, the two fibers are alignment sleeve, and then a permanent epoxy is used to maintain the structure. In fusion splicing, the two fibers are essentially melted and fused together. Fusion splicing is typically superior to other types of splicing, but needs more expensive specialized equipment

In addition to the functions that involve fiber coupling, a wide range of passive optical components exist. We will examine couplers, attenuators, and isolators.

Couplers are passive devices that allow for mixing or splitting light signals. One of the simplest of such devices is a 2×2 coupler which has two input ports and two output ports. As a coupler, it can mix two optical signals that are applied to its inputs and provide a portion of the result at each of its output ports. As a splitter, it can split a signal that is applied to one of its input ports into two portions and provide each portion at one of the outputs. A more general version of a coupler is an mxn coupler, also known as a star coupler, which mixes and splits m optical signals. These devices are widely used in optical networking applications.

An attenuator is a device that attenuates the optical power by a known amount. Fiber Attenuators are either fixed or variable. A fixed attenuator is an in-line or pluggable device that provides a fixed amount of optical attenuation. Fixed attenuators are simple devices that usually operate on the basic of a fixed air gap or misalignment between two fibers. Fiber Optic Variable Attenuator, on the other hand, can set the amount of attenuation over a wide dynamic range. These devices tend to be bulkier and more complex. 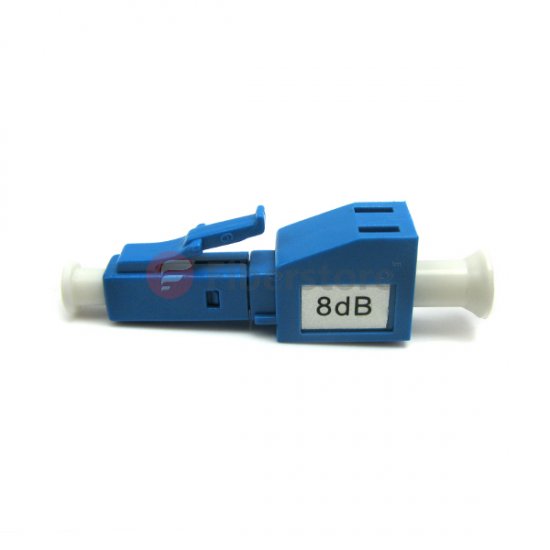 An optical isolator is a device that allows for light in only one direction. It is usually used to isolate a sensitive source, such as a DFB laser, from any potential back reflection. Optical isolators are usually based on a Faraday rotator and two polarizing plates aligned at 45°with respect to each other. Isolators can provides as much as 40 dB of attenuation for back-reflected light.

Another class of very useful passive elements is optical filters. These devices perform a task similar to their electronic counterparts and allow for discrimination of various components in a signal based on wavelength.

Fiberstore is a quite professional fiber optic store, we provide almost all fiber optic products, if you have some needs, welcome to Fiberstore!